Karen Tendō ( , Tendō Karen) is one of the deuteragonists of the series. She is from class 2-A and the president of the school's Game Club.

Karen is a teenage girl of average height who has green eyes and long blonde hair. While at school, she wears the same school uniform as the rest of the girls, while also wearing a black ribbon on the back of her hair and a dark blue sweater vest. She can also been seen wearing casual clothes outside of school, which varies depending on the occasion.

Karen is considered to be the most beautiful girl at Otobuki High School by her peers, which makes her stand out from both boys and girls alike.

Karen is an intelligent girl who studies hard in school and earns top marks as a result. Due to her beauty, she also has a charming personality and she is treated like an idol. She is kind and well-mannered, who is willing to help others, especially her teachers and friends, in times of need. She is also very athletic, as she has managed to reach 100m in just 12.30 seconds on a sprint, thanks to her daily exercises in the morning. She also takes time to properly reject those who have confessed their feelings to her and tries not to truly hurt them.

While she is the darling of the school because of these traits, she loves playing video games so much that she is the president of the school's Game Club. She has a competitive spirit, taking every game she plays seriously.

She does not seem to handle rejection very well, having burst into tears after Keita Amano rejected her club offer twice. She also developed a tendency to follow him around in an attempt to try and recruit him again.

After overhearing Keita's admiring words about her, as he stood up to Tasuku Uehara, she was greatly touched by his kindness and fell madly in love with Keita. As a result, her usual habits have been disrupted, since she can no longer focus on her games as usual because he is always on her mind. Her rejection of boys has unintentionally caused her to act more harshly to them and cause them to run off hurt or walk off upset, much to her dismay. Lastly, every time she sees Keita, she quickly becomes flustered and shy, which is in contrast to her usual calm and composed behavior. Also, she can't help but have various fantasies revolving around him, showing how much she has become fixated on him.

When she became Keita's girlfriend, she was very happy about finally being with him, though she is quite jealous with his associations to other girls like Chiaki Hoshinomori and Aguri. Despite this, she still has nothing but care for him and can't help but enjoy his company, as shown when she got excited to go out with him on a date. She also blushed after he held her hand at a festival or when she was touched after he admitted he could think of her for hours.

Later in the light novels, she and Keita broke up because she believed that their relationship was due to a misunderstanding. However, she still retained her feelings for him and works to try to win his heart fairly against Chiaki Hoshinomori who also tries to catch his attention.

In Volume 11 of the light novel, Keita asked Karen out (without any misunderstandings), and she accepted, making them officially a couple again.

Karen is the daughter of Kaori Tendō and famous actor Satoshi Miyamoto. When she was in fifth grade, Karen had an eccentric neighbor four years her senior named Mafuyu Shiina who would frequently visit her house to play video games with her. Despite being exasperated with the odd behavior of this self-proclaimed “Masked Gamer,” Karen grew fond of the neighbor girl, who influenced her own interest in games that would define much of her life going forward. Ironically, it was a deciding factor in Karen’s choice to attend Otobuki High School over said neighbor’s alma mater of Hekiyō, as the former was home to a Game Club that she wished to join.[1]

Karen used to wake up early and go out for an early morning jog before going to school. She is an avid gamer once spending a whole night playing video games. She would later reform the game club after getting permission, while there she invited other students though rejected those who joined just to ask her out. With the members she accepted, they would compete and win many contests. Whenever she receives love letters, she'd go turn that person down as she wasn't looking for a relationship.

One day, Karen went to a game shop where she met a fellow student of her school, Keita Amano. There was some brief awkwardness because of his choice of games and their brief misunderstandings of the other's words but after seeing that he enjoyed playing games like her, she decided to invite him to join her club.

The next day, she arrived at Keita's class to take him to the club, her appearance there surprised most of the class who had wondered about their relationship.

Karen soon introduced Keita to another student Eiichi Misumi, a classmate who she found playing games at the arcade while saying she would like both of them to join her club after showing them the other club members and games, the two boys have fun. Ultimately, Eiichi decides to join while Keita decides against joining the Game Club as he prefers to play games for enjoyment instead of competition, much to Karen and the other members' shock.

In spite of this denial, Karen arrives at Keita's class to invite him once more revealing she is interested in his skills as Keita's class watch their interaction intently. While he states he is flattered by her offer, Keita once again refuses as he just can't seem to change his outlook but wishes her luck. The rejection hits pretty hard with Karen, who frantically utters harsh words at him, which are ignored and she runs off in tears.

Not being deterred by his rejection, Karen was shown stalking Keita in the arcade where she is spotted by Aguri who was confused by this strange behavior. She is later noticed by Tasuku Uehara who sees her watching Keita but Karen quickly runs off after she notices Tasuku's gaze. After Keita leaves Tasuku's side, Karen sees him and tries to catch Keita's attention to invite him to her club again but she is ignored as he runs past her, much to her dismay and confusion. Karen followed him outside where she witnessed Tasuku insult her club and Keita threatening him, as he demands for him to take back what he said. Keita went onto list all the good things he thought about Karen and says that Tasuku has no right to badmouth her and demanded he take it all back. Once Tasuku and Keita reached an understanding, they part ways as Tasuku spots a love struck Karen, staring at the leaving Keita. Tasuku realizes that she overheard and was touched by Keita's words, falling madly in love with Keita. After Tasuku catches her attention, she is surprised and tries to come up with an excuse but fails as he states he understands her situation and wishes her luck in the endeavor as he tries to leave but she stops him by grabbing him. She frantically interrogates him on what he means by that statement as he states that he believes she and Keita will make a cute couple, to her embarrassment as he leaves.

The next day, she is still clearly love struck about Keita as her classmates take note of her odd behavior but she remains in this state. She is only snapped out of it when Eiichi speaks to Keita but her joy is short-lived after she hears Keita is only present to speak with another girl.

Karen then goes to speak with Keita, quietly jealous with his reason for coming and soon inquires as to why he came and collapses after he confirms he came to speak to someone else. She regains her wits and runs out of the room, while calling Keita two faced as she is followed by Eiichi. For the next few days, she jealously watches Keita and Chiaki's budding friendship while being encouraged by Misumi to talk to Keita about it but she is too shy. Later on, Tasuku calls her for a game meeting between him, Keita and Chiaki (who have had a falling out) after school. While she is still jealous at the closeness of the two, Karen is told by Tasuku that Keita really started to talk to Chiaki for a better way to speak to her, which relieves her worries. She does get worried when he starts talking to Aguri and wonders about them as well.

Sometime later, Karen tries to go about her usual activities but her thoughts are always frazzled when she thinks about Keita and cannot truly go on and ends up causing disasters or embarrassments for herself. While out on the weekend, she continues to berate herself for what happened with Keita and her affections for him until she conveniently bumps into him and they go to the arcade to play games. This was done as a way for her to discover how she really felt about him and clear her head for games. Even though she beats Keita at most of the games, the latter has no problem since he enjoys having fun with them.

Despite this, Karen still remained lost in her obsession with Keita and her performance in games suffered. Soon after rejecting someone, she was told by Eiichi that she should ease back in rejecting people as her way seemed a little heartbreaking to witness.

Very soon, she was summoned by Keita though she was nervous as she thought that he wanted to end their friendship. She mentally prepared herself for the rejection however, he instead asked her out on a date and she accepted in a heartbeat, much to the shock of him and everyone watching.

The day after, she meets Keita and he is nervous to see her and avoids her as she is worried by this display. Later on, Keita summons Karen to the roof as she frantically prepares herself for another possible rejection but he again asks her out on a date since they are a couple, to her joy. She immediately accepts and they part after spouting military like banter, much to each other's confusion. The two went on a date and she enjoyed her time with him, though she got jealous at the pool when they bumped into Chiaki who noticed and ran to Keita for help after boys were flirting with her. Karen tried to hide her jealously through a fake smile and casual greeting after Chiaki kindly greeted her but spoke up for the two to stop being so close to one another, to their fear. Chiaki apologized for dragging them into her trouble as she was looking for her younger sister who Karen offers to help find after jealously sending Keita away as Chiaki noted on their military like relationship.

Despite the third wheel joining them, she enjoyed her date with Keita and they talked about it on a bus ride sharing a laugh along the way, officially becoming a couple. It was mentioned by Keita that he and Karen now spend time talking to each other on the phone, showing much they have developed.

Sometime later, Chiaki invites Tasuku, Keita, Aguri, and Karen to her home for a board game to clear up misunderstandings. 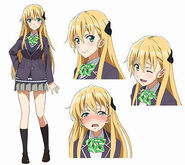 Karen is not amused.
Community content is available under CC-BY-SA unless otherwise noted.