Edit
watch 01:36
We're Getting Mutants in the MCU - The Loop
Do you like this video?
Play Sound

Chiaki Hoshinomori (ノ , Hoshinomori Chiaki) is one of the deuteragonists of the series. She is a classmate of Karen Tendō from class 2-A at Otobuki High School and a member of a non-school recognized gamer appreciation group together with Keita Amano and Tasuku Uehara.

Chiaki is a teenage girl of average height, whose eyes are tinted with a violet gradient. She is considered attractive by Tasuku Uehara and some other boys. Originally, she had long dark blue hair that nearly covered her eyes but after Keita Amano called her "Seaweed Girl", due to her bangs looking like seaweed and Tasuku commenting that she would look better if she had her hair short, she soon cuts and wears her hair short from then onwards.

She's also seen wearing the standard Otobuki High School uniform for girls like Karen but has also been seen wearing causal clothes when outside of school.

Chiaki is a shy girl and very reclusive. She did not seem to care about her looks at first until Keita and Tasuku came into her life. She did not socialize much and mostly preferred to play games on her own.

She uses two names online: "MONO" as a game player and "Nobe" as a game developer.

Though she and Keita got along at first, as they both enjoyed playing games alone and turned down Karen Tendō's offer to join the game club were for the same reason, their opposing views on games caused them bicker over something pointless. Despite their bad standing, when some boys at the pool were trying to flirt with her she quickly ran to Keita for aid, which showed that she still trusted him to an extent.

When she discovered that Keita was both "Tsucchi" and "Yama" was her online gaming friend and software supporter, she was very shocked at this revelation and fell into a slump as she processed this new knowledge. After regaining her composure, she pondered on what to do about it as she had met him the day after this event. She was shown to have developed intense feelings for Keita being unable to put up her usual act around him; and was seen acting flustered or blushing when interacting with him. However, she was conflicted to confess her new affection to him as he already had a girlfriend and most likely wanted nothing to do with her because of their previous encounters. She has even resorted to concealing the truth about her online gaming aliases by telling him they were both her sister after he nearly caught onto the truth. When she learned that Keita still valued his association with her, she was very shocked and touched by this despite all they've been through and tried to prevent him from leaving, in order to confess her feelings to him but she stopped herself after realizing her impulsiveness. This act along with the urgings from her sister and her own desires, has caused her to try attracting Keita's attention with a strong determination that surprised her sister.

In the light novels, when Karen and Keita broke up, Chiaki tries to catch Keita's attention while having a rivalry with Karen who still retained her feelings for him.

Chiaki is an avid gamer where she plays all day even if she isn't good at them and she is also known for making/developing various types of games that are generally a typical to current mainstream.

At one point, she was invited by Karen Tendō to join the game club though Chiaki refused right immediately. Her reasoning was while the people in the club was amazing, the way they play wasn't her style of gaming.

While playing games in class, Chiaki meets Keita Amano who she gets shy around due to being mutual strangers. After a brief awkward moment between them, she told him that if he wants her to join the game club her answer would still be a "no". However, she is shocked when Keita revealed that he rejected the offer as well and both learn it was for the same reason. With this, the two get over their nervousness and quickly form a friendship and often talking about games and each other even getting on a first name basis. They spend the next few days texting each other or lending the other aid in video games. This display caught the jealous attention of Karen Tendō who wondered if they were dating.

Their friendship hit a rough patch following their disagreement over games and soon they started bickering over trivial things which annoyed Tasuku Uehara, who stepped in and caused them to be at ease. He got Chiaki to blush after he suggested that she would look cute if her hair was cut shorter once Keita made a remark about it.

Following this, she cuts her hair short and her association with Tasuku and Keita brought about some disastrous affects as it led Aguri Sakurano to assume Tasuku was cheating, Keita and Aguri to befriend each other and led to Karen becoming jealous.

Despite this, she still remained on hostile terms with Keita though she did nothing to hurt him as she was surprised and supported his decision to asked Karen out on a date. On Keita and Karen's date, she was at the pool and noticed Keita who she quickly ran to for help after boys were flirting with her. After the boys left, Keita tried to get Chiaki to leave since Karen was present as Chiaki casually greeted Karen as the latter hid her jealously through a fake smile and greeting but spoke up for the two to stop being so close to one another, to their fear. She apologized for dragging them into her trouble as she was looking for her younger sister who Karen offers to help find after sending Keita away as Chiaki noted on their military like relationship. Chiaki learns her sister went home and became a third wheel as she joined Keita and Karen on their date.

One day, she invites Tasuku, Keita, Aguri and Tendou to her home for a board game to clear up misunderstandings. She briefly stepped out to speak with her sister and returns where she overheard and discovered, to her shock that Keita was her online gaming friend and game supporter. She was left in a slump of disbelief as a result after her sister found her.

After regaining her wits, she talks with Konoha Hoshinomori in a complex manner of what to do about the matter but doesn't receive a helpful answer. She soon goes out to the store where she bumps into Keita along the way, she is nervous as they talk and tries to put up her usual act around him. After he explains he lost his transit pass at her house, she invites him to the house to locate it. It was shown that she has developed feelings for him as after she secretly finds it, she tries to keep him company at her home. She faced a serious yet amusing problem when he nearly discovers her true identities. Chiaki then tried to nervously explain before her sister, who borrowed her computer and fell asleep in her bed, wakes up to see them. Springing on the moment, Chiaki tells Keita that those identities are her sister, much to Keita's and Konoha's mutual surprise. Konoha is then asked by her sister to pretend to be "MONO" (Chiaki's name as a gamer) and "Nobe" (Chiaki's name as a game developer), for Chiaki's sake due to her timid and sort of secretive personality.

In volume 5 of the light novel, Konoha examines Keita’s similarities to Chiaki in order to determine what game would make for the best birthday gift for Chiaki. Chiaki greatly appreciates the present and expresses her joy to Keita, not realizing that he was the one Konoha consulted to find an appropriate game.

Later, in the further scenes, she explains to her sister that she was conflicted to talk with Keita as he was already with Karen and because of their previous associations. At the amusement park, she and her sister joined Keita and Karen who were on a double date with Tasuku and Aguri.

In the anime, she collapses out of dizziness at the Kizuna Dungeon and is carried to a bench by Keita. Much to her surprise, she learns from her sister about what happened. When Konoha leaves promptly, they talk with Keita explaining to Chiaki that while they may have had problems that her association to him means too much, to her shock. Having believed he would want nothing to do with her, she becomes happy and even impulsively stops him from leaving but is conflicted on trying to confess her affections to him and apologizes for her actions. She tries to head home but Keita stops her imploring to stay out and have fun, to which she agrees. After regrouping with everyone, she told her sister that she couldn't express her feelings to Keita at the moment. Nevertheless, she has decided to motivate herself to attract his attention later on with a determination that surprised her sister.

In the light novel, Chiaki proceeds through the Kizuna Dungeon with everyone. Due to a misunderstanding involving the lights emitted by the noise-reducing headphones the entrants wear in the dark, Chiaki is paired up with Karen and both mistakenly assume they have been paired up with Keita. As the lights come on at the end of the dungeon, Chiaki is surprised not only to find that she and Karen had been cuddling together, but also by the sight of her little sister clinging uncomfortably close onto Tasuku, but most shockingly the sight of Keita and Aguri embracing each other and on the verge of kissing. 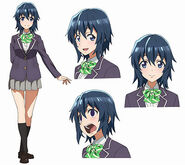