Aguri Sakurano ( , Sakurano Aguri) is one of the deuteragonists of the series. She is a student at Otobuki High School and the girlfriend of Tasuku Uehara.

Aguri is a somewhat short teenage girl with long pink hair that has two hair clips on the right side and violet eyes.

She wears the usual Otobuki High School uniform like the rest of the girls, while wearing a yellow uniform sweater inside which almost reaches the tip of her skirt. She prefers to leave her blazer unbuttoned with the ribbon loose and she wears a black choker necklace.

It is revealed her hair was formerly black, but she dyed it to make herself appealing for Tasuku upon seeing his new look for school.

Aguri is immature and tends to be a clingy girl towards Tasuku though this is because he now spends his time hanging out with others. She also tends to be somewhat of a ditz which is remarked on by Keita Amano. However, much of her ditzy behavior is an act that she puts up because she had heard that Tasuku was fond of such girls. As she spends more time with Keita, she demonstrates a surprising awareness of emotional matters and educates him on feelings. In the first DLC volume, she shows herself to be more observant than she seems, as she laughs at Ao Saika and Ayumu Kiriya’s mistaken assumption that she is Keita’s girlfriend during their whispered conversation, and recognizes the latter’s true gender despite her attempts to hide it from Keita.

She initially disliked Keita and suspected him of taking her boyfriend’s attention away from her, but she came to befriend Keita after he tried to ease her fears about Tasuku being unfaithful to her. She gets easily jealous, as seen when she saw Tasuku interacting with others like Karen Tendō or Chiaki Hoshinomori.

It was mentioned by Tasuku that due to her interactions with Keita that she has matured a bit, this is most likely because she has given Keita advice about love or relationships and become more accustomed to being true to herself rather than pretending to be an airhead for Tasuku. She and Keita develop a close bond with one another over the course of their regular meet ups to discuss their relationship troubles. Kudo and Shinohara insult Keita without knowing anything about him other than his interest in games, Aguri jumps to his defense and asserts that he deserves respect, even when her old classmate Sarina expresses bafflement that she would feel so angered on behalf of someone who is not her boyfriend. Aguri often turns to Keita in times of distress, and has expressed happiness at seeing him in a relationship with Karen. Despite frequently laughing at his nerdy hobbies herself, Aguri considers Keita a close friend and has expressed that being in his presence motivates her to face her anxieties. In Volume 11, she admits that she loves Keita and can easily see herself being happy in a relationship with him, but she ultimately loves Tasuku most of all and trusts him enough to be honest with him about these feelings.

When Tasuku takes a more assertive stance in his relationship as he held Aguri's hand twice with both times surprising her, she was surprised and noted on his change.

Prior to high school, Tasuku visited the arcade and he once gave Aguri a plushie he won as gift to her. Ever since then, she has been in love with him despite his nerdy appearance and poor reputation.

Upon learning they were going to the same high school, she saw the opportunity to be with him but after seeing his new look and learning of his popularity, Aguri decided to make herself stand out after hearing his preference in girls. Soon, she confessed her feelings to him though snow landed on her the confession was still accepted and they became a couple. 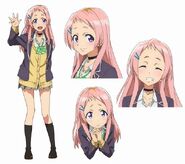